In Colombian City, Gangs Thrive Amid Protests and Anarchy

Community members participate in a vigil for two young people who were killed the night before as police and antigovernment protesters clashed.

By Kejal Vyas | Photographs by Oscar B. Castillo for The Wall Street Journal

CALI, Colombia—For the past two decades, this Colombian city has worked hard to counter its image as a hotbed of drug gangs and thugs. The city government launched social programs and other initiatives that cut crime here by more than half and led to an economic renaissance.

But the pandemic, and now social protests as a result of hardship caused by the pandemic, have upended all that, plunging Cali into chaos amid six weeks of violent antigovernment demonstrations. Making matters worse, young men from Cali’s vast network of drug-dealing gangs are taking advantage of the anarchy to settle turf wars, helping send the murder rate skyrocketing.

Homicides in Cali nearly doubled to 172 in May from a year earlier.

“We’ve never lived a moment of such magnitude,” said Mayor Jorge Iván Ospina. “It’s all so dramatic. The breakdown in public order is permitting criminal activity to strengthen.”

The tensions in Cali, where poverty measured by income grew 67% during 2020, is a warning to cities around Latin America and the developing world where the health crisis took priority over spending on social programs and antiviolence initiatives. Gangs here are now surging.

Protests that broke out across Colombia in late April against government tax and health-care overhaul proposals have left dozens dead, according to the government and rights groups. Roadblocks have choked off commerce, paralyzing an economy already reeling from the pandemic. Throughout, police have come under intense criticism from rights groups for alleged excessive force and for causing some of the deaths.

But behind the violence here in Colombia’s third-largest city and the epicenter of the conflict is a more complex situation where political protests have overlapped with economic despair and the daily quarrels between Cali’s deeply embedded street gangs. As police withdrew from protest points following abuse accusations, suspected gang members have not only infiltrated protest sites but use them as venues for hits and vendettas against rivals, police and protest organizers said.

Trapped between gang battles and protester skirmishes, residents said they are now living in a daily inferno where no one is in charge.

“I feel like I’m held hostage,” said Luz Marina Noguera, a 51-year-old who lives next to a protest point where two gangs last week duked it out with a hail of bullets that sent neighbors running into their homes and children ducking behind vehicles. She recounted how young men in hoods blocking traffic wouldn’t let her car pass without paying a toll.

During a recent visit by a Wall Street Journal reporter to a large intersection occupied by demonstrators and dubbed “Port Resistance,” an almost tranquil setting of teens playing volleyball in the street was quickly upended as young members of  two gangs faced off with pistols and knives at the edge of the protest camp.

Police said that one of those gangs has embedded itself into the protest point to cut off the drug-trafficking route of its rival.

Cali has long been mired in conflict. Situated between the world’s largest production regions of coca—cocaine’s raw ingredient—and the Pacific ports through which the drugs are trafficked, the city has been the battleground for everyone from cartels to leftist guerrillas. In its gritty barrios, police have identified at least 53 different gangs—known locally as “offices”—that fight over street corners to deal dope.

Colombia has made strides in reducing overall homicides in recent years, and Cali, once known as the murder capital of the world, had painstakingly brought them down to 1,100 murders last year from about 4,000 a year during the height of the drug wars in the 1990s, according to Mr. Ospina. But the current chaos threatens to undo those gains.

Unemployment and school closures have contributed to an uptick in youth gang activity. But law-enforcement officials, rights activists and community organizers here also point the finger at the city’s decision to scrap rehabilitation programs for gang members because of financial constraints prompted by the pandemic.

Through one of the city’s programs, called Agents of Peace and Culture, some 2,000 youths had received a monthly salary starting in 2016 in exchange for leaving gangs, performing community service and sticking to an education plan. In the targeted districts, police statistics show that homicides dropped from 380 in the first year of the program to about 30 in 2019.

After the plan was canned, Jhony Fernandez, a 36-year-old former gang member who had spent recent years counseling teens in the program, said he watched several of his pupils pick up guns and go back. Another former counselor in a nearby barrio said 15 of the 30 youths he had recruited for the program returned to criminal life. 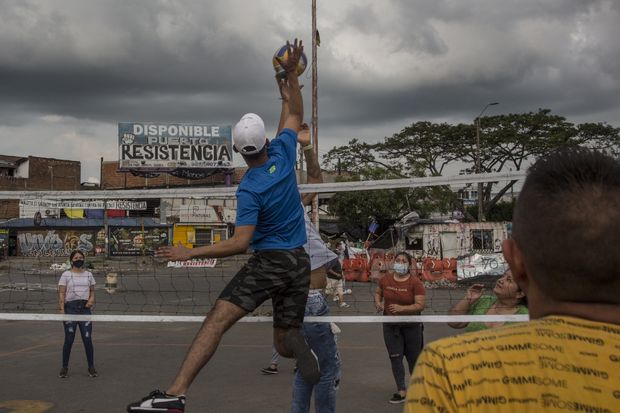 Then, over the past month, Mr. Fernandez said some youths from his program found a new home at protests. Struggling to eat three meals a day, he said many of them are drawn by the food served at demonstrator camps.

“If the programs had continued, we would have been able to keep control of the youngsters, reign them in,” said Mr. Fernandez. “Unfortunately, the city just threw them back into the streets.”

When Mr. Ospina, a Cuba-educated surgeon, took office in January 2020, he suspended the programs, promising to restructure them and make them more efficient. But just two months later came the pandemic. Cali’s vibrant nightlife scene was shuttered. The mayor said he had to slash property taxes to relieve businesses, sapping public resources from youth programs.

“We were hit with a tsunami,” said Mr. Ospina, whose father, a former leftist guerrilla, was killed here in a police raid in 1985.

Now, police and social workers said, thousands of those youths have returned to the streets. Fausto Prieto, a former city hall worker who has been organizing demonstrations, described the difficulties his movement has faced because protesters mounted road barricades in city districts already demarcated by expanding criminal groups.

“We’ve had to negotiate our space with them,” Mr. Prieto said. “They know that the police aren’t going to come, so any groups looking to settle scores, this is their moment.”

The often confusing melee of violence that has ensued has residents like Gersin Riascos, a singer and composer who lives near a demonstration site, conflicted over the demonstrations.

The 59-year-old said he favored the protests against inequality, poverty and corruption and thanked demonstrators for forcing the government to postpone its tax-increase plan. But “a lot of bad guys infiltrated this movement,” Mr. Riascos lamented. “Colombia was like a dormant volcano. Now it’s a volcano in eruption.”

The civil unrest has shaken Colombian President Iván Duque’s administration. Negotiations between the government and a mediator group of labor unions and civil-society organizations have stalled.

Luis Fernando Castillo, who police said was a former gang member, was gunned down on a sunny morning while standing near a protest point that he and his barrio neighbors were manning.

Though the 40-year-old had been seen by many in his poor neighborhood as a hero for setting up soccer camps for kids, his past gang activity had made him a hot target, his neighbors and police said, believing that the shooting was a hit orchestrated by a rival clan.

The Duque administration said it has opened 180 disciplinary investigations against police for alleged abuses, including 13 homicides. But the government blames much of the unrest on violent agitators as well as drug syndicates looking to destabilize law enforcement, given Cali’s strategic location in the global narcotics trade.

What seems certain is that the convergence of civil unrest and growing gang activity promises to deepen misery in the city.

Alexandra Ruiz, 20, said she hasn’t been able to earn money for more than a month because the road barricades forced the plastic factory where she works to close. “The government needs to talk to these protesters, but sadly we have no leadership right now,” she said. 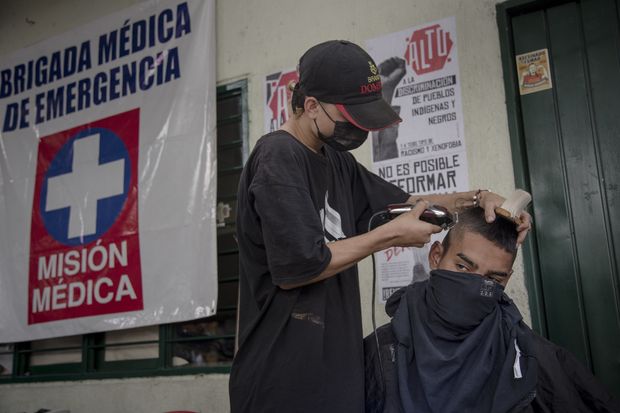