Although Rafael Correa, the former president of Ecuador, is in exile, he still exerts great influence over the country’s politics. Credit… Daniel Berehulak for The New York Times

The country, facing a pandemic and an entrenched recession, is seeing political debate revolve around the legacy of a long-gone leader.

QUITO, Ecuador — Ecuador is holding a presidential election on Sunday, but the name on many voters’ lips is not on the ballot.

Here in Ciudad Bicentenario, a neat housing project on the Andean slopes of the capital, Quito, it is on Rafael Correa that most hang their hopes of overcoming the overlapping crises brought on by a pandemic and a recession.

A charismatic former president, Mr. Correa governed during an economic boom in the 2000s that helped many left-wing leaders in Latin America lift millions out of poverty and build a lasting popular following.

The leftist wave has since subsided; most of its leaders were accused of corruption and authoritarian overreach. Mr. Correa himself was convicted of graft, faces 35 other criminal investigations and is barred from running again.

But he, like other powerful leaders of the so-called Pink Wave, continues to loom large over the political landscape, polarizing the country and focusing debate on his legacy rather than on the reality facing Ecuador today.

From exile, Mr. Correa championed the candidacy of Andrés Arauz, 35, a little-known economist, as the standard-bearer of his political movement, known as the Correismo. The backing catapulted Mr. Arauz to the front of the presidential race, although some of his supporters barely know his name.

“I’m voting for my Rafaelito,” said María Obando, a 65-year-old pensioner from Ciudad Bicentenario, using an affectionate diminutive of Mr. Correa’s first name. When reminded that Mr. Correa is not running, she said: “It doesn’t matter, I’ll vote for his guy.” 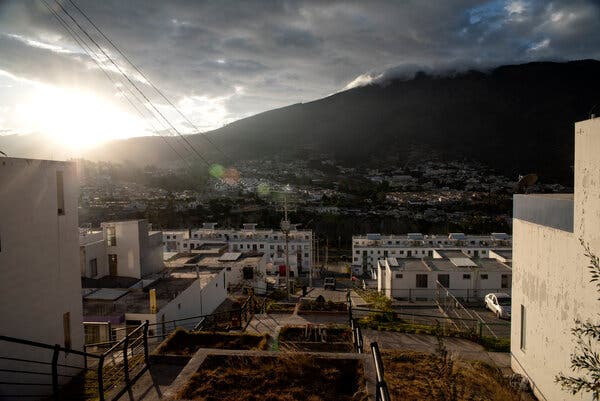 Ciudad Bicentenario was built during Mr. Correa’s administration, housing up to 1,200 families in Quito.Credit…Johis Alarcón for The New York Times 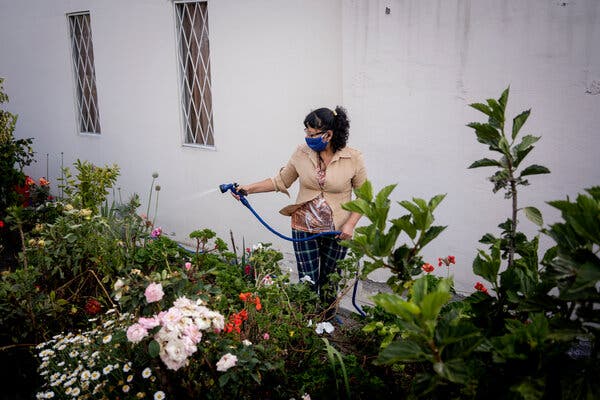 Watering a garden in Ciudad Bicentenario. Mr. Correa earned the allegiance of many by bringing stability to a nation once rife with political and economic turmoil.Credit…Johis Alarcón for The New York Times

Mr. Arauz is running against Guillermo Lasso, a former banker; Yaku Pérez, an Indigenous environmental activist; and 13 other candidates.

More than a third of voters say they plan to cast their ballots for Mr. Arauz, putting him about eight percentage points ahead of Mr. Lasso and within striking distance of an outright victory in the first round of voting on Sunday, according to a Jan. 28 polling average compiled by Electoral Calculus, an Ecuadorean research group. (Mr. Arauz could win outright with 40 percent of the vote if he is 10 points ahead of his closest rival.)

Mr. Correa’s enduring appeal could continue a regional trend that has seen recession-fatigued voters in Argentina and Bolivia return to power the parties of leftist populists associated with better days and social spending.

“We, as a political project, want the return of the policies that produced so much well-being,” Mr. Correa said in an interview. He said that he personally told Mr. Arauz he had been chosen as the movement’s candidate and that he stays in “permanent contact” with him — displaying a WhatsApp group that he said includes his protégé as evidence of that connection.

Mr. Correa, the country’s longest-serving president since it emerged from military dictatorship in 1979, earned the allegiance of many by bringing stability to a nation once rife with political and economic turmoil.

He handed some of the country’s oil revenue out in cash grants to the poor, and he built schools, roads and heavily subsidized housing, like the rows of three-story apartment blocks in Ciudad Bicentenario.

But the economy largely ground to a halt after oil prices fell in 2014, and the pandemic tipped stagnation into a crippling crisis. Economic activity shrank by an estimated 9 percent last year, when the coronavirus left hundreds of dead bodies on the streets of Ecuador’s second-largest city, Guayaquil. 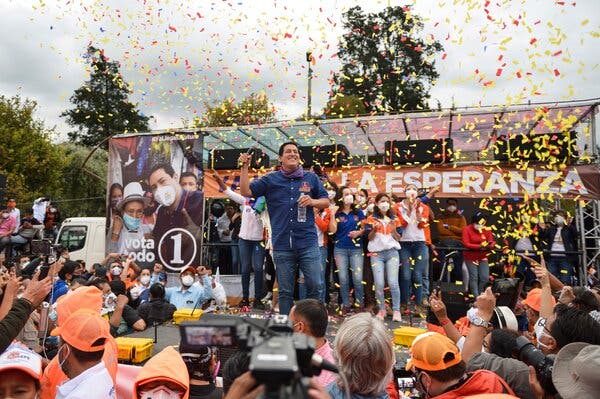 The long political shadow cast by Mr. Correa on Ecuador underlines how popular South American leaders continue exerting power long after their time is officially up, often propped up by an enduring following.

In neighboring Peru, where presidential elections will be held in April, the daughter of the jailed authoritarian former president Alberto Fujimori is running second in some campaign polls, although the race remains volatile.

And in Cuba, Nicaragua and Venezuela, once-popular leaders or their protégés have sidestepped free and fair elections altogether to perpetuate their rule.

Mr. Correa’s successor and his former vice president, Lenín Moreno, wants to see Ecuador break that mold, arguing that leaders with too tight a grip on power are unhealthy for democracies.

“The eternalizing of power, unfortunately, leads those who wield it to acquire malice, which in more than one occasion has ended in corruption and even crimes against humanity,” Mr. Moreno said in an interview during his visit to Washington last month. “When your period ends a leader has to say, ‘Right, enough.’”

After winning election in 2017, Mr. Moreno broke with his former ally and radically reversed the nation’s course, abandoning Mr. Correa’s leftist populism and anti-imperialist rhetoric for a conservative economic policy and closer ties to Washington.

Mr. Moreno said he also sought to rebuild the democratic institutions damaged by what he called his predecessor’s disdain for the rules. He oversaw the restructuring of the top court to make it more independent, renegotiated the national debt and stopped official attacks on the news media.

“What they built, unfortunately had lost direction,” Mr. Moreno said, referring to the previous administration.

Mr. Moreno chose not to seek re-election, and reinstated presidential term limits abolished by Mr. Correa. His administration also undertook the corruption investigations that resulted in the former president’s conviction and the jailing of eight of his ministers. But Mr. Moreno’s austerity measures made him highly unpopular, leaving many Ecuadoreans clamoring for Mr. Correa’s return.

José Fernández, a pensioner in Ciudad Bicentenario, said Mr. Correa’s protege faces a tough fight. “The situation is not the same, the economy is not the same.” 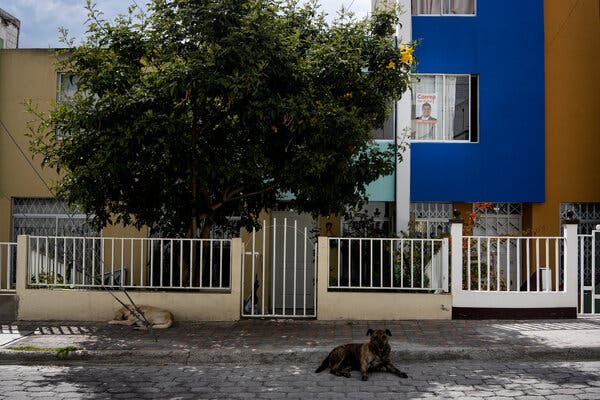 A poster for Mr. Correa in a window at Ciudad Bicentenario. He’s on many voters’ minds, though he is not on the ballot.Credit…Johis Alarcón for The New York Times

Mr. Correa said the corruption charges against him were political and called Mr. Moreno “the worst traitor in Ecuador’s history.” He said the economic austerity measures should be scrapped and the top judges installed by Mr. Moreno replaced. The president and the attorney general investigating him, Mr. Correa said, will ultimately end up in jail.

“Everything becomes a referendum on Correa,” she said. “The results are these constant swings back and forth, with leaders changing the system as they see fit before their successors try to undo it.”

These swings undermine economic stability and investor confidence, making it harder for the nation to advance, Ms. Grais-Targow said.

Mr. Correa said he would continue living in Belgium, where he moved with his Belgian wife after leaving office, but defended his enduring political ambitions. He said he would advise Mr. Arauz if he wins office, claiming to be “in perfect synchrony” with the candidate.

“What would be the problem?” Mr. Correa said when asked if he would run for office in the future. “Leaderships are desirable, no country has developed without leadership.”

Political analysts say whoever wins the election will struggle to meet promises of a speedy recovery. The national coffers are empty, and the bulk of the country oil exports go to China as repayment on Chinese loans.

“The situation is not the same, the economy is not the same,” said José Fernández, a pensioner in Ciudad Bicentenario, referring to Mr. Correa’s boom years. “It’s going to be tough.”

Still, he plans to vote for Mr. Arauz, because he offers the biggest hope of repeating Mr. Correa’s economic success.

“Look, if this guy does exactly what Mr. Correa tells him to, he’ll do fine.” 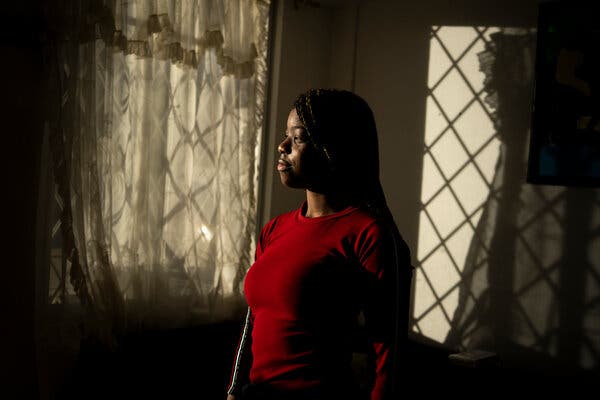 Nayeli Carcelén and her family benefited from Mr. Correa’s housing program. She is still deciding whom to support.Credit…Johis Alarcón for The New York Times

Venezuelans seek joy amid the chaos

As the country’s first Indigenous president has tumbled from power, Indigenous Bolivians fear the loss…