Meridith Kohut, center, covering anti-government street protests in Caracas, Venezuela, in 2017 while on assignment for The Times.CreditCreditBetty Zapata

Meridith Kohut, an American photographer who frequently freelances for The Times, feels “a moral obligation to stay” and bear witness to the horrors of Venezuela’s economic collapse.

Times Insider delivers behind-the-scenes insights into how news, features and opinion come together at The New York Times.

If you know anything about the crisis in Venezuela, you’ve most likely seen the work of Meridith Kohut, an independent photojournalist based in Caracas.

Meridith, who frequently photographs for The Times, has taken some of the most haunting images to come out of the country as its economy has spiraled deeper into chaos.

There was the baby boy who died of heart failure caused by extreme malnutrition, his father weeping over the coffin. The emaciated patients locked in isolation cells at an underfunded psychiatric ward. The street protesters in gas masks hurling Molotov cocktails at security forces. Meridith’s photos, at once unsettling and illuminating, offer a window into the daily struggles of Venezuelans.

This month Meridith, 35, was one of four female journalists around the world to be honored by the International Women’s Media Foundation with a Courage in Journalism Award. In a recent interview, she spoke about the challenges of reporting in Venezuela, the global resonance of her work and what she wishes readers knew. 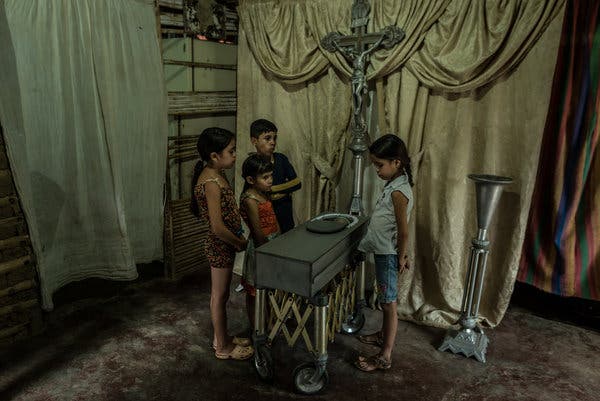 Kenyerber Aquino Merchán was 17 months old when he starved to death. His family placed tiny cardboard wings on top of Kenyerber’s coffin to help his soul reach heaven — a tradition when a baby dies in Venezuela.CreditMeridith Kohut for The New York Times

What drew you to photojournalism?

Ever since I was really young, I was fascinated by photography and social justice. I was constantly the kid who was questioning authority and challenging rules. In high school I started shooting for our local paper, and then at university I studied photojournalism.

I’m from Texas, and Latin American culture is a part of life there. Growing up, I had friends who were immigrants. I also studied Spanish in high school and university.

When I was a broke student in college, I began taking buses to Mexico and Central America and built my portfolio with stories about Latin America.

Why did you go to Venezuela?

I moved to Venezuela a few months after graduating from college. I was fascinated by Hugo Chávez and went to cover the socialist revolution. My plan was to go for a few months. Then a year turned into a few years, and now I can’t believe I’m still here.

Is there one photo essay you’ve done that stands out in your memory?

The story I reported last year on child malnutrition in Venezuela was the most important and the most difficult I’ve ever done.

I had been in Venezuela for 10 years, so I had witnessed the rise and fall of the revolution. I’d seen the entire crisis unfold. For years people covered it as bread lines and protests, but no one had reported that people were dying from it.

David Furst, the international photo editor for The Times, told me to take a year and travel throughout the country to find untold stories about how the crisis was affecting Venezuelans. I set out with Nick Casey, the Andes bureau chief for The Times, and we did a series of articles about everything from people going to illegal mines to find gold because the currency was so devalued to people begging drug dealers to put them on boats full of cocaine in order to flee the country.

In October 2016, Nick’s visa was denied, so he couldn’t return to Venezuela. David said that meant I would have to help report and write in addition to taking photos. I started hearing whispers from workers at nongovernmental organizations and people on the street that babies were dying from starvation. 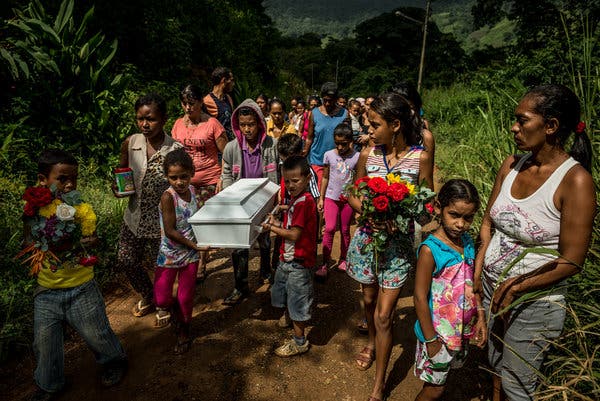 Children carrying the coffin of Kleiver Enrique Hernández, who was 3 months old when he died of malnutrition.CreditMeridith Kohut for The New York Times

Venezuela is one of the richest countries in the world; it has the largest known oil reserves. Even though there was a crisis, it was still shocking to hear that people were starving to death.

I spent five months going around the country to report the story with Isayen Herrera, a Venezuelan journalist. It was incredibly hard. We had to work with doctors to give us information and put us in contact with families whose babies were dying. We went to babies’ funerals. We photographed young boys who had left home and joined street gangs because they didn’t have food.

Our story comprehensively documented the malnutrition and how difficult it was for Venezuelans to access food. It was on the front page and went completely viral, changing how the world viewed the severity of the crisis.

Have you faced repercussions in Venezuela for your work?

I’ve been detained more times than I can count. I’ve received death threats. I’ve been beaten by soldiers, punched in the face and shot with rubber bullets. When I was covering the massive street protests, soldiers shot me in my bulletproof helmet at close range and I got a concussion.

State television has called me a C.I.A. operative who is trying to destabilize the revolution. Intelligence services have even falsely accused me of stealing babies and harvesting their organs to sell on the black market; they threatened to put me in prison for life for it.

What keeps you in the country after everything you’ve experienced?

The good thing about being in Venezuela for so long is that I have residency. The government has cracked down on the press since the crisis began, so I’m one of the few foreign journalists left in the country.

I feel a moral obligation to stay because I have the perfect trifecta: the legal ability to work here, the resources of The Times to do in-depth stories and a large platform for people to see our reporting. 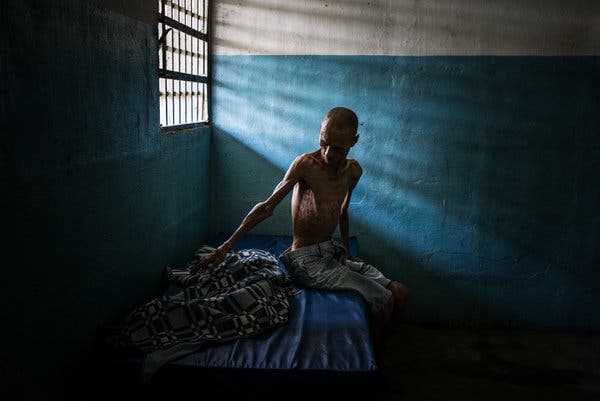 Omar Mendoza, a Venezuelan being treated for schizophrenia, is undernourished and had lost half his weight. He and patients at El Pampero Psychiatric Hospital in Barquisimeto, Venezuela, about 170 miles west of Caracas, are suffering as the country’s economic crisis has crippled its public health system.CreditMeridith Kohut for The New York Times

How do you maintain enough emotional distance from your subjects to do your work effectively?

A lot of journalists talk about needing to withdraw emotionally to get the job done, but I feel the opposite. I don’t try to limit my emotions when I’m in the field. I do the reverse and try to put myself in the people’s shoes and feel everything they’re feeling.

Do you ever get desensitized to the horrors you witness?

If you can see what we’ve witnessed in Venezuela and not be affected emotionally, I think you’re in the wrong profession. You have to be able to sympathize with the people you’re documenting. You have to be sensitive to their feelings and to the extraordinary circumstances they’re living under.

For certain stories, especially when I saw babies die and watched how their parents struggled, this was overwhelming. Sometimes my face was soaked because I was crying so much. But I can still take pictures; I can still do my job. If anything, when the families knew that I cared enough to be upset about their child, we became closer. I think if I were there as a numb, cold observer, it would have been less natural.

I don’t suffer from post-traumatic stress disorder or struggle with the emotional weight. I think a big reason I’m able to handle everything is because I process it in the moment. I’m channeling the emotions into the work. 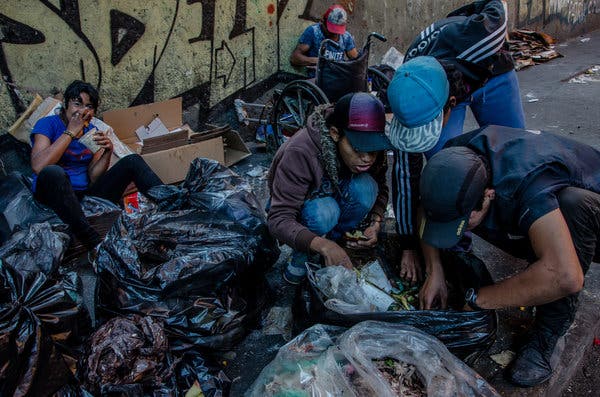 Families scavenging for food scraps from garbage bags in Caracas, an uncommon sight before the economic crisis worsened.CreditMeridith Kohut for The New York Times

How do you weigh the danger of your job?

We’re constantly at risk, but it’s all calculated. We spend a lot of time with The Times’s security team and with editors planning logistics down to the most minute detail so that we’re taking the most reduced risk possible.

Is there anything you wish readers knew about what goes into your work?

The biggest thing that I would love for readers to know is how much the people in our stories are sacrificing by putting their security, jobs and families at risk. Yes, it takes courage to report something that the government wants hidden. But it takes much more courage to be the person quoted or the person who lets you document intimate, painful moments of suffering. It’s incredibly selfless and brave for people to say, “Yes, I will be the face, the family who represents the struggle of so many other Venezuelans.”

Have you ever felt disadvantaged for being a woman in your profession?

Absolutely. I’m constantly underestimated in the field. That used to frustrate me, but I use it to my advantage now. Soldiers see me as nonthreatening because I’m a woman, so I can sneak past them with more ease than my male colleagues.

But I’m an outlier because I’m one of the few women photojournalists who regularly get assigned to stories in tough places with dangerous people. My editors are somewhat blind to my gender because they send me to report stories that most other editors would rarely assign to a woman.

How is the #MeToo movement reshaping photojournalism?

I’ve dealt with being discriminated against for being a woman throughout my career. Every single one of my friends who are women photojournalists has also dealt with discrimination, and it’s past due that we’re having these conversations. There’s still a lot of work to do because the number of women in photojournalism is dismal — the glass ceiling is still firmly intact. 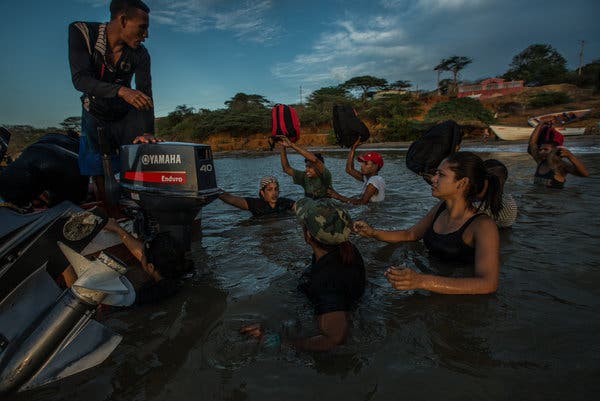 Venezuelan migrants boarding a smuggler’s boat that will take them to the island of Curaçao.CreditMeridith Kohut for The New York Times

What issues do you want to tackle next?

Things are getting worse in Venezuela, and people have lost hope. Thousands flee to neighboring countries every day, so I’m focused on documenting the growing migration crisis.

What is the biggest personal takeaway from your work?

Documenting the crisis has renewed my faith in the power of journalism, especially right now as journalists are attacked, doubted and questioned for the role they play in society.

We uncovered truths that the Venezuelan government wanted hidden and told them to the world. International organizations and diplomats got involved in Venezuela, and the donations sent to help Venezuelans were overwhelming. People know what’s going on with the crisis because of journalists.