Venezuelan migrants walk along a highway last week in Cúcuta, Colombia, on the border with Venezuela.Credit…Schneyder Mendoza/Agence France-Presse — Getty Images

President Iván Duque announced Monday that the Venezuelan migrants who fled an economic collapse at home can legally stay in Colombia for 10 years if they register with the authorities.

BOGOTÁ, Colombia — President Iván Duque of Colombia announced Monday that his government will provide temporary legal status to the more than 1.7 million Venezuelan migrants who have fled to Colombia in recent years, a far-reaching move that will allow the migrants to work legally and establish lives out of the shadows.

The decision was hailed by the head of the U.N. Refugee Agency, Filippo Grandi, as “historic” and “the most important humanitarian gesture” in the region in decades.

The decision will allow Venezuelan migrants who register with the Colombian government to stay in the country for 10 years.

More than half the 1.7 million Venezuelans in the country do not currently have legal status. Under the new measure, those who entered Colombia without permission before Jan. 31 are eligible for legalization. And those who already have legal status will now be free, for at least a decade, from having to reapply for permission to stay.

Venezuela, run by a socialist-inspired government for the last two decades, has been in crisis since 2014, prompting a collapse that economists have called the worst in decades outside of war. As food, gasoline and medicine have disappeared, and as the government of President Nicolás Maduro has becoming increasingly repressive, about 5.4 million people have left the country, leading to one of the largest migration crises in the world.

About a third of Venezuelan migrants landed in neighboring Colombia. 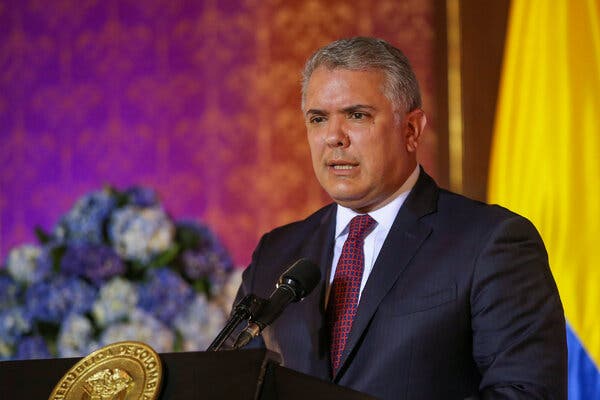 President Iván Duque of Colombia announcing on Monday a measure to allow Venezuelan migrants to stay in the country for 10 years.Credit…Luisa Gonzalez/Reuters

In a speech on Monday, Mr. Duque, a conservative whose government is closely aligned with the United States, characterized his decision in both humanitarian and practical terms.

He urged listeners to have compassion for migrants around the world. “Migration crises are by definition humanitarian crises,” he said.

But he also stressed that the move would aid the government in doing its job, by helping officials identify people in need, and by helping them track down anyone who violates the law.

The arrival of the nearly two million Venezuelan migrants in a country of 50 million has stretched budgets and angered some Colombians, who view the newcomers as competition for jobs and other services. Mr. Duque’s announcement Monday is likely to exacerbate some of that anger.

In his speech, he reiterated a call for more global aid to help Colombia deal with the humanitarian crisis, which the Brookings Institution has called one of the most underfunded in modern history.

On Monday, Yohany Gonzalez, 46, a Venezuelan immigrant originally from Caracas, called the new Colombia policy “the best thing that could have happened to me.”

Ms. Gonzalez crossed into Colombia on foot three years ago, with two of her children and a grandchild, and has not been able to find work because she has no legal status, she said. She spends her time in the street, trying to sell trash bags and candies.

“I don’t want to continue in the street, begging,” she said. “I want a real job.”