A man standing near the coffin of a relative this month at a cemetery on the outskirts of La Paz.Credit…David Mercado/Reuters

Bolivia was mired in political turmoil when the pandemic hit. The response was chaotic. And the surge in deaths that followed was among the worst in the world, according to an analysis by The New York Times.

TARIJA, Bolivia — So many people were dying that the government’s numbers couldn’t be accurate.

Calls to pick up bodies were inundating Bolivia’s forensic office. By July, agents were gathering up to 150 bodies per day, 15 times the normal amount in previous years, said the country’s chief forensic official, Andrés Flores.

The demand on his office suggested that the official tally of Covid-19 deaths — now just over 4,300 — was a vast undercount, Mr. Flores said. But with limited testing, scarce resources, and a political crisis tearing the country apart, the extra lives lost were going largely unrecognized.

New mortality figures reviewed by The Times suggest that the real death toll during the outbreak is nearly five times the official tally, indicating Bolivia has suffered one of the world’s worst epidemics. The extraordinary rise in death, adjusted for its population, is more than twice as high as that of the United States, and far higher than the levels in Italy, Spain and the United Kingdom.

About 20,000 more people have died since June than in past years, according to a Times analysis of registration data from Bolivia’s Civil Registry, a vast number in a country of only about 11 million people.

Tracking deaths from all causes gives a more accurate picture of the pandemic’s true toll, demographers say, because it does not depend on testing, which has been very limited in Bolivia. The mortality figures include people who may have died from Covid-19 and from other causes because they couldn’t get health care.

207,000 Missing Deaths: Tracking the True Toll of the Coronavirus Outbreak 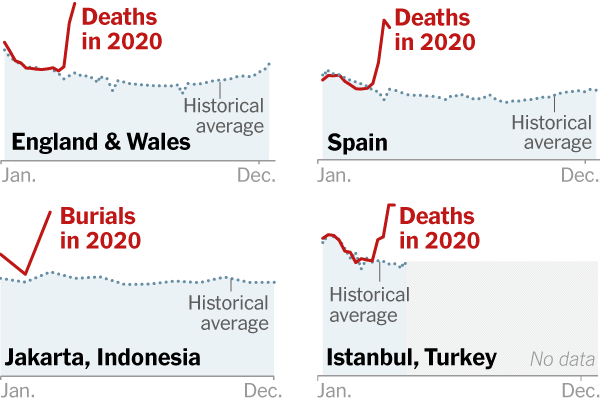 “This is a very cruel situation that we’re living through,” said Mr. Flores, who heads the Institute of Forensic Investigations. “We’ve been left completely exposed.”

With a bare-bones health system, a decentralized government and poor infrastructure, Bolivia struggled to contain infectious diseases such as dengue even before the coronavirus arrived, said Virgilio Prieto, an epidemiologist at Bolivia’s Health Ministry.

But its ability to respond was undermined by a contested election that led to the ouster in November of the then-president, Evo Morales, a socialist. An interim president, Jeanine Añez, a conservative, stepped in with a promise to govern until elections could be held

Since then, Ms. Añez has announced that she is running for the office — and asked the electoral board to postpone the new vote, saying the pandemic made it unsafe for the population to go to the polls. The rescheduling of the vote from May to October has enraged opposition groups, who see it as an attempt by the caretaker president to cling to power. 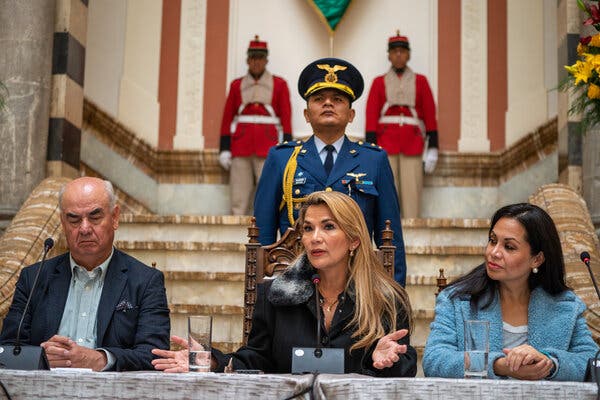 Jeanine Añez, the interim president, is running for president in elections now scheduled for October.Credit…Federico Rios for The New York Times

“She is not recognized as a legitimate leader, which makes it extremely difficult to coordinate a complex response that the pandemic requires,” said Santiago Anria, a Bolivia expert at the Dickinson College in Pennsylvania.

Ms. Añez’s decision to run for president herself antagonized the opposition lawmakers and regional officials on whom she depended to mobilize health care resources, said Mr. Anria, leading to a disorganized, ineffective effort.

Her response was also bogged down by corruption scandals, including the arrest of her health minister in May after investigators accused him of using money from international donors to buy hospital ventilators at twice the real cost.

Ms. Añez defended her approach to the outbreak, saying that her decision to enact a swift lockdown avoided an even greater loss of life. She also blamed Mr. Morales’s party for mismanaging the health care system during its 14 years in office and stifling her plans to boost public spending in the pandemic.

More than a hundred road blocks by labor unions and Mr. Morales’s supporters have paralyzed an already weakened economy, leaving the government with fewer resources to import urgently needed medical supplies. The shortages of oxygen and other equipment caused by the road blocks resulted in the deaths of at least 30 patients, the government said in a report to the Organization of American States. 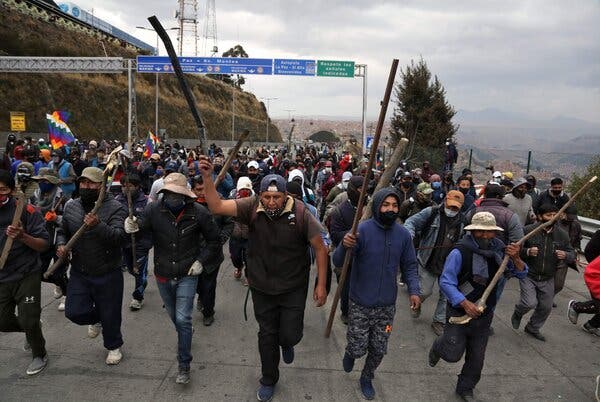 Supporters of Evo Morales, the former president, blocked the highway between La Paz and El Alto this month to protest against a second postponement of the general election.Credit…Luis Gandarillas/Agence France-Presse — Getty Images

As hospitals ran out of medicines and coronavirus tests, Mr. Morales’s allies in congress passed a law to allow the medical use of a bleaching agent, chlorine dioxide — an unproven and potentially dangerous coronavirus treatment popular among Bolivians.

“The pandemic has found us in a very precarious situation, with an inexperienced government and elevated political tensions,” said Franklin Pareja, a political scientist at the San Andrés Major University in La Paz. “This political standoff has a cost in lives.”

Although Bolivia’s official statistics show a severe spike in mortality starting in July, the closure of government offices during a lockdown in April meant that almost no deaths were registered that month. Officials at Bolivia’s Civil Registry, which issues death certificates, warned that at least some of the deaths that occurred in April could have been registered in later months, potentially skewing the mortality rate.

The scale of the mortality spike, however, is confirmed by Bolivia’s overwhelmed crematories, cemeteries and body-collection agencies.

The spike in deaths had collapsed Bolivian hospitals and forced local authorities to expand their crematories and open new cemeteries. In La Paz’s municipal cemetery, residents and hearses had to line up outside the entry last week for a chance to bury their loved ones.

In Bolivia’s capital, Sucre, local health authorities said they had to stack up dozens of bodies in morgues, hospitals and even the local university, until they were able to install a new crematory oven to meet the demand. And in the central city of Cochabamba, families had to keep bodies of their loved ones at home for days because local funeral parlors and crematories could not handle the increase.

Despite the crisis, some regional governments, under pressure to restart the economy before the elections, are reopening gyms and restaurants, feeding fears that mortality rates will continue to rise. The Health Ministry estimates that the country will only reach the peak of the pandemic in September. 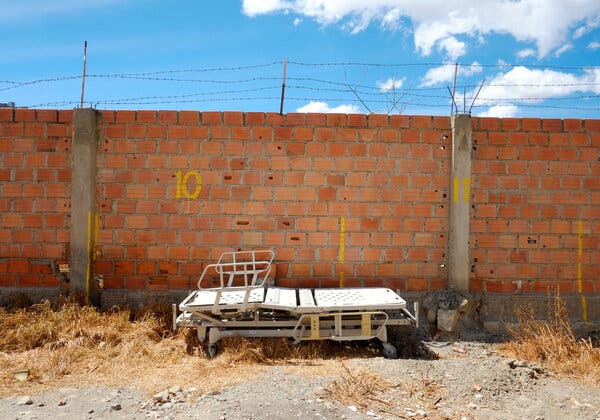 A hospital bed outside a hospital morgue this month in La Paz.Credit…David Mercado/Reuters

And in the meantime, the population will continue to bear the burden of Bolivia’s ineffective response.

When Josué Jallaza, a 24-year-old taxi driver in Cochabamba, fell sick with coronavirus symptoms, his family called three times for a doctor, but no one ever came. After he fainted, his family took him to a hospital, “but they didn’t want to admit us,” said his brother, Marcelo Jallaza.

“They threw us out like a dog,” Mr. Jallaza said.

They then took him to a private clinic, where “a doctor came out, looked into his eyes, and said, ‘He’s already dead, we can’t do anything,’” said Mr. Jallaza.

The family took the body home, and spent four days trying to bury it. After pleading in tears with cemetery officials, they were finally granted a grave.